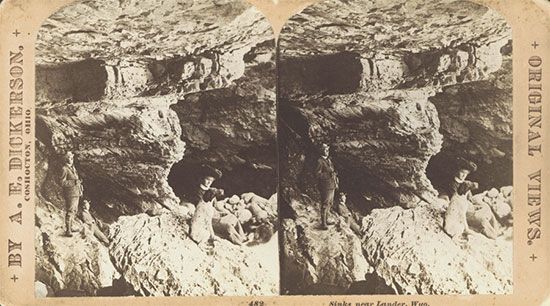 A. E. Dickerson was an Ohio photographer who is better known for his western views than those of his home area of Coshocton. He was active beginning in the late 1880’s and continued working until around 1910. During that time Dickerson always stereoviewed his western journeys. He made a series of trips to Colorado, Idaho and Utah during the 1890’s and produced many unusual views there. His Colorado mining scenes are especially interesting. Later in his career, he moved to St. Paul, Minnesota and became affiliated with the Co-Operative View Co. Some uncredited Dickerson photos can be seen on Co-Operative View Co mounts. Although his numbers reach as high as the #700’s, today Dickerson stereoviews are quite scarce.