The most recent major geologic force that shaped Wyoming as we know it today were the Ice Ages. For the past 3 million years the earth’s climate has periodically cooled and gotten wetter allowing huge sheets of ice to form in the mountains. These sheets of ice became so thick they created glaciers, sheets of ice often miles thick, which then began to flow down towards the valleys. These massive walls of ice acted as huge bulldozers carving canyons, and shaping the jagged peaks and cirques of Wyoming’s mountain ranges. There were at least four major glaciations and several smaller ones. The most recent glacial event ended about 10,000 years ago and evidence of it is all around Sinks Canyon. Huge granite boulders carried from high in the mountains and deposited in the canyon are evidence of the power of the ice. 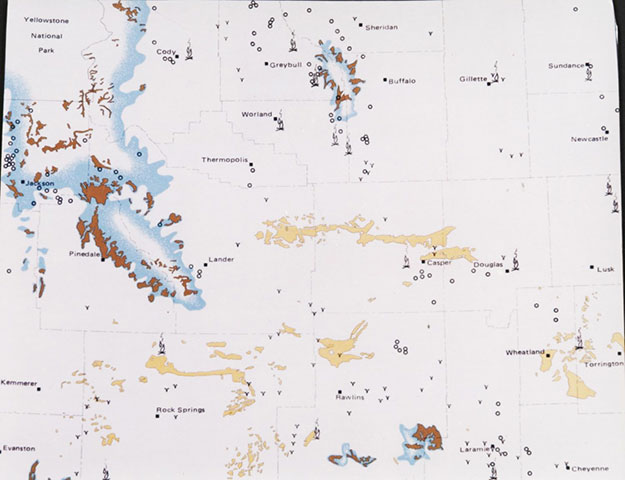 This maps shows the extent of the glacial ice at the height of the most recent ice age. The Wind River Mountains and most of the Northwest corner of the state were covered by thousands of feet of ice. The yellow represents sand dunes (many of which still exist today) created by the wind blowing fine sand from glacial outwashes.