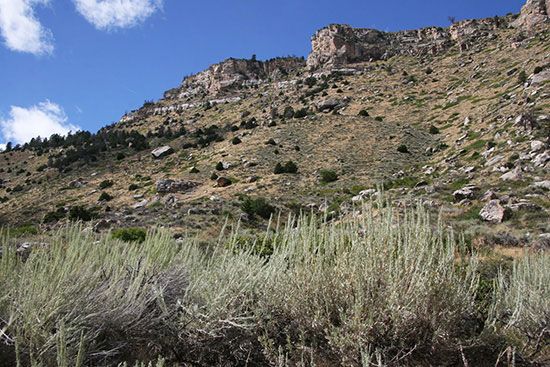 Sagebrush on the south facing slope.

The south facing slope of the canyon gets a great deal of sunshine year round. In the winter this direct sun reflecting off the massive cliff faces melts most of the snow before it can sink into the ground. This lack of moisture prevents many plants from growing here. Plants that are adapted to drier conditions such as sagebrush and juniper trees grow well on this slope. Much of the slope is made up of Big sagebrush, an aromatic silver-grey shrub. Since it is a wintergreen and sticks up through the snow it’s a critical source of food for Mule Deer. A plant growing next to sage in the canyon is Bitterbrush, a shrub with tiny three-pronged leaves. Bitterbrush is also a vital source of wildlife food. This slope is important winter habitat for wildlife since it is usually clear of deep snow and has food available year-round. Sagebrush habitat may look dry and empty, but they teem with life and are one of the richest and most diverse ecosystems in the west. Dozens of wildflowers flourish in the sage, as well as many bird species. Rattlesnakes and other reptiles as well as many small mammals make this their home.

Traditionally Bighorn Sheep have lived in the canyon. Petroglyphs on the rock faces show images of the sheep. By the 20th century no sheep were left. They had been hunted out and lost habitat. In the 1960s and 1980s and 90s the Wyoming Game and Fish Dept. tried to re-establish herds in the canyon by bringing in sheep from other parts of Wyoming. In the early 1990s there were about 150 of the animals in the canyon and they were a common sight.

The herd struggled. Invasive plants such as cheat grass had degraded the south facing slope so the animals didn’t have enough nutritious native grass to eat. The Bighorns also got diseases from domestic sheep in the area (mainly pneumonia) and most died. By 2008 there were only a few sheep left and in 2009 one lone sheep, a large male nick named “Bam-Bam” was the only Bighorn left.

“Bam-Bam” became habituated to people and would hang around the road often butting cars. While he was a popular sight (even becoming a celebrity on You-Tube) it was only a matter of time before he was killed on the road or hurt someone.

The Game and Fish transplanted him to the Sybille Research Facility in Southeastern Wyoming where he lived the rest of his life with a few other Bighorns. After Bam Bam died, his body was donated to the park by the Game and Fish and he was taxidermied and is on display in the Visitor Center to help educate people about Bighorns.

The future of Bighorns in Sinks Canyon is unknown. Until the threat of domestic sheep in the area is gone, it isn’t likely any more will be moved in, but Bighorns do live in other parts of the Wind River Range.

The Prairie Rattlesnake is common in the canyon. It is an important predator of mice and other rodents and part of the ecosystem. The snake is not aggressive and would rather flee than fight. It will coil up and buzz its rattles if startled, but seldom bites. If you come across one in the wild simply walk away. If you leave it alone it won’t bother you. This snake resembles the non-venomous Bullsnake, also seen in the canyon.

The Bullsnake is common in the canyon. It resembles a rattlesnake but has no rattles and is not poisonous. This snake is often killed by people thinkng it is dangerous, which is a shame since the snake is mild mannered and is an important predator of rodents.