The north facing slope of the canyon is in the shade much of the winter. This allows the snow to buildup providing the water these dense stands of conifer trees need. Trees on this side of the canyon are mostly Douglas Fir and Limber Pine. Douglas Fir can be identified by the cone, which has a sharp, 3 pointed bract projecting from the cone scales, and a “bottle-brush” arrangement of the needles. Limber Pine needles are arranged in bundles of five. Limber Pine seeds are a favorite food of many animals. 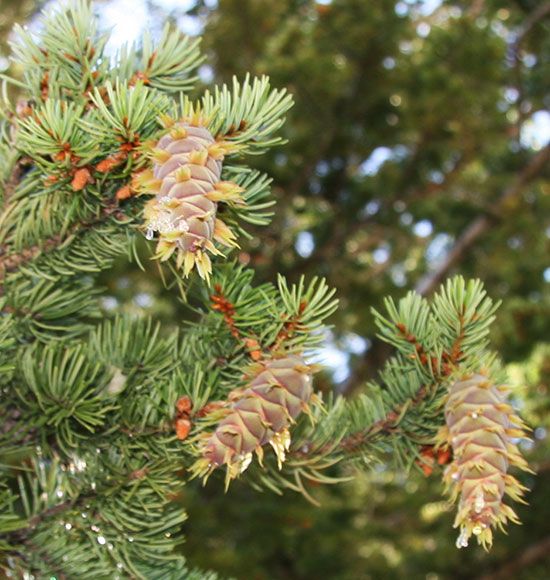 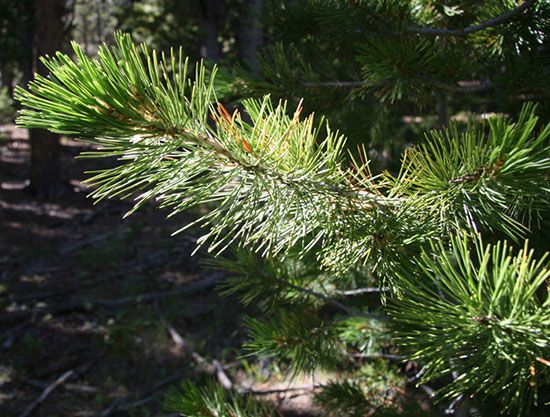 The Limber Pine has a distinctive needle cluster.

During the past decade both species of conifer have been hit hard by an infestation of Pine Bark Beetles, a tiny insect that in large numbers, can kill a tree. Across the west Pine Bark Beetles have devastated forests.

A variety of other plants grow on the shady north facing slope: Oregon Grape, a low growing evergreen plant, and Wild Rose along with many wildflowers. Shrubs like Snowberry, Mountain Lover, Serviceberry and others grow well in this habitat.

Like many forests throughout the west, the canyon has been hit by the Pine Bark Beetle. Many of the dead conifer trees you see were killed by infestations of this tiny insect.

The beetle is always here, it is part of the habitat, but recently it has become a major problem.

A serious 10 year drought has stressed the trees so they have a harder time fighting off the beetle. Warmer winters are allowing more of the beetles to survive (they can be killed by extended cold spells), so more beetles attack more trees.

Unfortunately there is little we can do to fight the infestation. Chemical treatments are expensive and not very effective, and we can’t control the weather. The problem will probably get worse before it gets better.